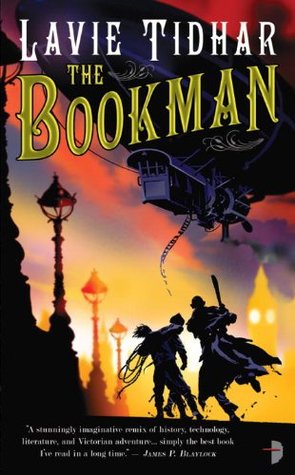 A masked terrorist has brought London to its knees -- there are bombs inside books, and nobody knows which ones. On the day of the launch of the first expedition to Mars, by giant cannon, he outdoes himself with an audacious attack.
For young poet Orphan, trapped in the screaming audience, it seems his destiny is entwined with that of the shadowy terrorist, but how? His quest to uncover the truth takes him from the hidden catacombs of London on the brink of revolution, through pirate-infested seas, to the mysterious island that may hold the secret to the origin not only of the shadowy Bookman, but of Orphan himself...

Like a steam-powered take on "V for Vendetta," rich with satire and slashed through with automatons, giant lizards, pirates, airships and wild adventure. "The Bookman" is the first of a series.