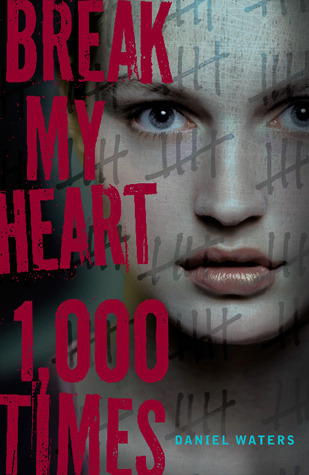 Living in the aftermath of the Event means that seeing the dead is now a part of life, but Veronica wishes that the ghosts would just move on. Instead, the ghosts aren't disappearing-they're gaining power.
When Veronica and her friend, Kirk, decide to investigate why, they stumble upon a more sinister plot than they ever could have imagined. One of Veronica's high school teachers is crippled by the fact that his dead daughter has never returned as a ghost, and he's haunted by the possibility that she's waiting to reappear within a fresh body. Veronica seems like the perfect host. And even if he's wrong, what's the harm in creating one more ghost?
From critically acclaimed Generation Dead author Daniel Waters, comes a delectably creepy and suspenseful thriller. Break My Heart 1,000 Times will leave readers with the chills. Or is that a ghost reading over the page?

Sixteen year old Taylor Oh is cursed: if she is touched by the ghost of a murder victim then they pass a mark beneath her skin. She has three weeks to find their murderer and pass the mark to them – letting justice take place and sending them into the Darkness. And if she doesn’t make it in time? The Darkness will come for her…
She spends her life trying to avoid ghosts, make it through school where she’s bullied by popular Justin and his cronies, keep her one remaining friend, and persuade her father that this is real and that she’s not going crazy.
But then Justin is murdered and everything gets a whole lot worse. Justin doesn’t know who killed him, so there’s no obvious person for Taylor to go after. The clues she has lead her to the V Club, a vicious secret society at her school where no one is allowed to leave… and where Justin was dared to do the stunt which led to his death.
Can she find out who was responsible for his murder before the Darkness comes for her? Can she put aside her hatred for her former bully to truly help him?
And what happens if she starts to fall for him?